The army of Mary will be recognized by this mark: its fidelity to Rome and to the Pope.

And this Army of Mary will be recognized by this single trait — «its fidelity to Rome and to the Pope».

[The immediate context of the phrase of Raoul Auclair (1967), used again by Heaven and Marie-Paule (1971), is marked by the publication of the encyclical Humanae vitae of Pope Paul VI, on marriage and the regulation of birth (25 July 1968). In the volume III of Life of Love, in August 1968, Marie-Paule gave her support for this teaching of Paul VI in favor of «a truth so contested today by the majority of men» (LL III, 36). From the very next page (LL III, 37), Marie-Paule quotes Raoul’s phrase on the fidelity to Rome and to the Pope, which will be the distinctive feature of the Army of Mary founded on 28 August 1971.]

[The featured image for this article is the page 307 of the Lignum Vitae, by Arnold de Wion, where was published for the first time the Prophecy of the Popes attributed to the Irish archbishop Saint Malachy of Armagh. Source: Wikipedia.]

In order to facilitate the understanding of the present analysis, I made a table containing the list of the 111 mottos of the Prophecy of the Popes. The purplish section corresponds to the Avignon Papacy (1309-1378), with the intervention of saint Catherine of Siena. The greenish section corresponds to the Great Occidental Schism (1378-1417). A short time later will intervene, in France, saint Joan of Arc, in favor of King Charles VII. The final sections (pale blue and pale red) contain the last eight mottos of the Prophecy of the Popes, in connection with the period named: the «End of the Times», the «Day of Yahweh», the «Apocalypse» (1917-2033). The pale red section coincides more specifically with the Church of John, thanks to the intervention of Mother Paul-Marie, in the apocalyptic context. The motto numbers followed by an asterisk correspond to the antipopes.

This table can be downloaded in pdf format (click on the link).

A holy man was the archbishop of Armagh, in medieval Ireland, around the year 1135. His middle-Irish name is rendered in English by Malachy, which is also the name of the last prophet of the Old Testament. Malachy of Armagh was a close friend of Bernard of Clairvaux. In 1138, Malachy made a pilgrimage to Rome (in those times, a pilgrimage was often a very long, exhausting and even perilous journey). Passing through the city of York, in England, he met Cistercian monks and that’s how he heard of Bernard, the most influential figure of that religious order. So Malachy made a detour in direction of Clairvaux, in France, and had his first contact with this great spirit, who will be known as the Mellifluous Doctor (that is the one whose doctrine is as sweet and suave as honey). Upon returning from Rome, Malachy stopped at Clairvaux a second time and would have stayed there, but Pope Innocent II wanted him back to his mission in Ireland.

Ten years later, in 1148, Malachy wanted to meet Pope Eugene III, who was then on official visit to France. By the time Malachy landed on French soil, the Pope already got back to Italy. So he decided to continue his trip up to Rome, but not without making a visit again at Clairvaux. He arrived there in October completely exhausted, with a violent fever, and he finally died in the arms of his friend Bernard, on 2 November 1148.

A most well-known prophecy is attributed to the saint bishop Malachy. It is called the Prophecy of the Popes. This prophecy consists in a list of 111 phrases or mottos in Latin, which correspond to the future popes, beginning with Celestine II, who succeeded Innocent II on 26 September 1143.[1] Some people say that, while he was in Rome in 1138, Malachy had a prophetic vision of the history of the Church through the next sovereign pontiffs. Others say that he wrote the famous text during his stay at Clairvaux, and that Bernard might have been the first reader of it. In any case, the manuscript reporting his vision was forgotten and lost, until its rediscovery more than four centuries later. Of course, some historians or theologians have said that this prophecy would be in fact a forgery, created to influence the election of the new pope in 1590. Thus discredit was brought upon the prophecy, until later events shed a new light on it.

My goal is to give you some knowledge about that very special prophecy, so special that Saint Raoul Auclair devoted to it an entire book. Mother Paul-Marie read that book of Raoul in the very year (1969) of its publication (LL V, 47-48; cf. LL VIII, 304). She mentions the Prophecy of the Popes elsewhere in Life of Love and other of her writings. That topic also came up in several articles presented in the paper The Kingdom over the years. I would like to draw, from all these writings of the Work, some key ideas we can find, in order to offer a comprehensive vision of the Prophecy of the Popes.

So the Prophecy of the Popes was first published in 1595, by a Benedictine monk and historian, by the name of Arnold de Wion. If that text was a forgery meant to influence the election of the pope five years earlier, as mentioned, well, it didn’t work: another cardinal was elected (Niccolò Sfondrato, who became Gregory XIV), and not the one expected (Girolamo Simoncelli) by the alleged forger. But, as we will see later, the last mottos of the prophecy, corresponding to the modern popes, are so eloquent that they strike the attentive observer, like a seal of authenticity.

It is not a question here of commenting on each of the 111 mottos of the prophecy. But we should say a word on the very first of these enigmatic expressions. The first motto goes like this:

The Tiber is the main watercourse of the city of Rome, so the castle or the fortress on the Tiber represents the Roman Catholic Church. Associated with Pope Celestine II (1143-1144), this first motto indicates that the whole Prophecy of the Popes is about the Church which Christ established on the rock of Peter.

Raoul Auclair does not comment on the mottos 2 and 3:

We know from Life of Love (LL XII, 60) that the expression «Holy Mountain» (also present in the Bible) corresponds to the «Garden of Mysteries» or to the «Terrestrial Paradise», this «Garden of Eden» lost by our first parents, after the original sin. The New Adam and the New Eve (Jesus Christ the Redeemer and Marie-Paule the Co-Redemptrix) form the Total Christ and are represented by the «stone the builders rejected» which has become the «cornerstone», the same «stone» which broke the metallic Colossus with feet of iron and clay in Daniel’s Book (Dn 2).

But the stone that struck the statue became a great mountain and filled the whole earth. [Dn 2, 35b]

[Nebuchadnezzar had seen, in a dreamlike vision, a colossal statue representing the succession of five empires. This statue had a golden head (Babylonian Empire), a silver chest and arms (Persian Empire), a bronze belly and thighs (Greek Empire), iron legs (Roman Empire), and finally feet of iron and clay (which Raoul Auclair names the «Time of the Nations», or «the impossible fifth empire»). For Raoul, the total duration covered by the symbolic statue is 2520 years, from the year 602 BC until the year 1917. Raoul names the whole of this period «Time of the Gentiles».]

This «great mountain», or «Holy Mountain», thus can indicate the Terrestrial Kingdom, where the access to the lost Paradise will be given to us. The Time of the Church (motto 1: «From the castle on the Tiber») will make way for the Time of the Kingdom (motto 3: «From the greatness of the mountain»), while Satan, the Ruler of this world, will be chained for 1000 years (motto 2: «Enemy expelled»).[2]

Let’s make a leap in history together, a few centuries later. More precisely at the time of Pope Sixtus V (1585-1590), on the eve of the publication of the prophecy. We are at the motto number 73, that reads like this: 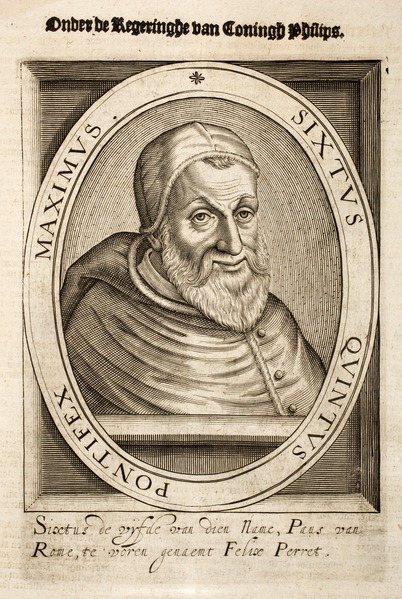 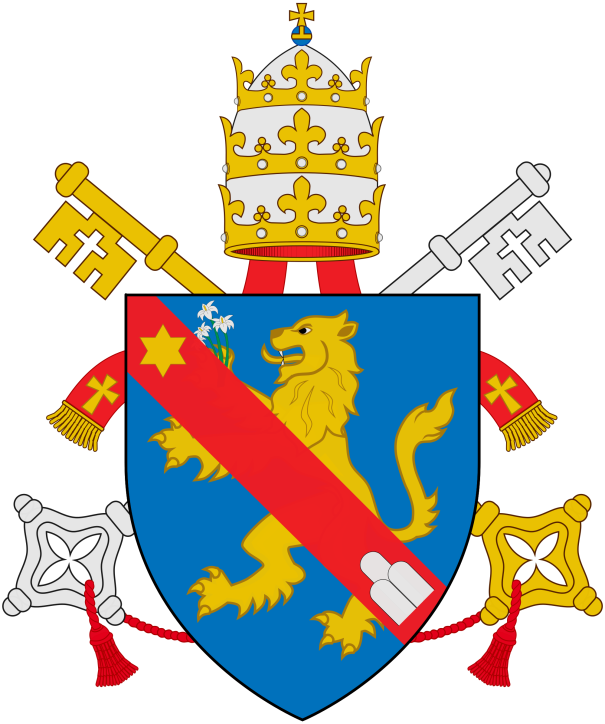 For Raoul Auclair, «the sign» is the whole Prophecy of the Popes, and «the axis» in the «midst» of it means that the middle of the pontificate of Sixtus V divide the prophecy in two. Let’s remember that the prophecy contains 111 mottos. Well, we will find here again that number 111, as a key number in the structure of the prophecy. When the harmony of Numbers is present in a prophecy, this is yet another indication that it comes from God. So the prophecy begins in 1143. If we add 444 years, it brings us in the middle of the reign of Sixtus V (1587). That means we should add another 444 years, in order to arrive at the end of the prophecy (2031). Considering that the Church was born at the death of Jesus-Christ in the year 33, the prophecy brings us this amazing timetable:

We can divide the Prophecy of the Popes into two groups of mottos. If we attach the very brief pontificate of Urban VII (only 12 days in 1590) to Sixtus V, the first group contains 74 mottos, and the second one contains 37 mottos, in a ratio of 2 to 1 (3 × 37 is the only way we can factorize the number 111). The conclusive motto of the first group is: 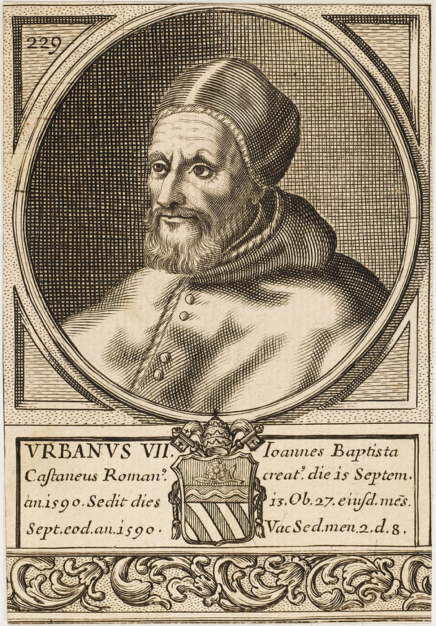 The Terrestrial Kingdom will be the presence on earth of «the dew of the sky», which is the symbol of God’s blessing. That is where the prophetic mottos of Saint Malachy lead us. Interestingly, if we take the first motto of the second group (the one that corresponds to Gregory XIV), we find another expression designating the Roman Catholic Church, which was first described as «the Castle on the Tiber». Now, opening the second group, we have: 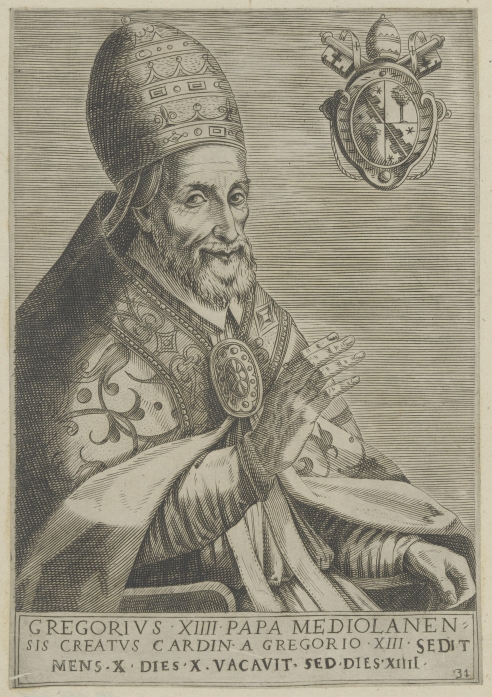 Rome, the eternal city, is the centre of the Catholic Church.[4]

We shall continue the next time…

[The papal coat of arms showed on this blog comes from Wikipedia.]

Very often, Raoul made clear to us that any calculation in this matter could vary by two years, more or less, from the year in question, for sometimes hundreds of centuries are involved, and he gives a very striking example of this. [The Hosanna of Life!, p. 18]

The number 111, considered as the «key» or the «sesame (keyword, magic word)» to open the prophecy, is also given by the 20th motto SIGNUM OSTIENSE («Sign of Ostia»), which is the only one containing the word «sign» along with the 73rd motto. SIGNUM OSTIENSE begins in 1254, exactly 111 years after the beginning of the prophecy in 1143. In Antiquity, the town of Ostia was the port of Rome, situated at the mouth of the Tiber. The Latin word «ostium» can mean: entry, opening, passage, door, mouth of a river. It contains the root «os», meaning: mouth, orifice, opening, mouth of a river.